This page discusses methods on wiring LEDs to microcontrollers. It is recommended you read Electronics Basics first if you are new to electronics.

LEDs inherently have no method to control the amount of current that flows through them. If plugged directly into power, they will continue to draw current until they heat up and burn out.

To prevent this, current limiting resistors are used to restrict the current to a known value.

To calculate the correct resistor, three (3) parameters are required:

If you do not wish to calculate values for each color LED, 220 ohm is a safe value to use for nearly all LEDs.

160 ohm is not a common resistor value, so we will go up to the next possible one, which is 180 ohm. 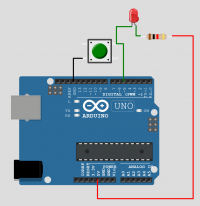 This will only require one pin on the Arduino per button.

An example of how to wire reactive lighting is shown to the upper right.

With HID Controlled wiring, the microcontroller is able to control the LED on and off via software.

Both of the options below will require two pins on the Arduino per button. 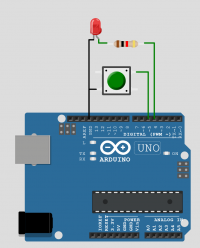 With direct drive, the microcontroller sources or sinks the LED directly from its pin. A typical Arduino can source / sink 30mA per pin, which is an acceptable amount of current for most LEDs.

An example of how to wire reactive lighting is shown to the lower right.

For driving high-current LEDs or driving LEDs with a voltage higher than your microcontroller can output, you can control the LED with a mosfet.

Mosfets have a few key features to select: